Do you ever watch old spy thriller movies or read spy novels? Coded messages are often a part of unraveling the diabolical scheme of whatever villain wishes to do harm to truth, justice, and the American way. Or perhaps you are familiar with the history of breaking the German Enigma Code during World War II. The primary investigator credited with leading the way in breaking the code was Alan Turing. Many consider him to be the father of computer science.[i] Turing basically designed a computer-like machine to break the daily-changing encryption. It was a key contribution to the Allied victory.

Let’s now try and break the code below, only with the code key already given.

TO BE OR NOT TO BE IS A GREAT LINE FROM HAMLET.

Writing and decoding that code required an intelligent source. It could not happen blindly. It just so happens that our example code could also be a segment of a real code inside of a cell on messenger-RNA, a code of instructions for protein assembly. Proteins are the building blocks and workhorses of the cell. Over half the dry weight of the cell comes from proteins.

If we scramble a bunch of letters together without an intelligent design, without deliberately placing them in a meaningful order, we would get meaningless gibberish such as this: EDSI OCRT TAE HRGO

But using intelligent deliberation by placing the same letters in proper order gives meaning: GOD IS THE CREATOR

Inside every cell, there is a stored code which dictates the proper order of amino acids to “spell” a protein correctly. The code is stored inside DNA (deoxyribonucleic acid), a two-stranded helix. The code comes from the arrangement of four possible bases on the DNA strand, which are represented by the letters A, T, G, C, (A, U, G, C in RNA, like in our Hamlet example). Notice that different combinations of three bases as triplets selected from the four base letters determined the order of letters and spaces in our decoded Hamlet message. Amino acid sequences to build proteins are determined in the same way.

Humans have over 3 billion bases (base pairs across the helix) of information from these four base letters distributed in 23 chromosomes. Information for a lot of cellular activities are stored there, but we are limiting our programming example to protein manufacture. To the left is my sketch of a typical segment of the double-helix strands of DNA, showing the base pairs on the DNA backbone.

The sequence of the triplets from bases A, T, G, C, along the DNA strand determines the sequence of amino acids in a protein that must be “spelled” properly. It is a programmed code, remarkable evidence for intelligent programming of that code. This why Bill Gates wrote, “DNA is like a computer program but far, far, more advanced than any software ever created.”[ii]

We cannot expect such a designed program code to write itself by accident through random chemical events in nature any more than we could expect intelligent functional software to happen by accident without the intelligence of software programmers. There must be a Programmer for these biological software codes just as there must be a programmer for computer software codes. Furthermore, a designed code by definition indicates a personal designer, as does any deliberate design. Deliberation necessitates personal mind as well. Blind neo-Darwinian mechanisms cannot explain information that is necessary in every living cell from the very beginning of life, created fully operational!

Science supposedly embraces the idea that the present is the key to the past.[iii] If this is the case, then we ask the question, “What is required today to write a meaningful software program?” Answer: An intelligent mind. Looking to the past, obviously a programmed code “far, far more advanced than any software ever created” also required an intelligent source, a divine mind, God. Indeed, God is worthy of our praise for we are “fearfully and wonderfully made” as the Psalmist declared long before DNA coding was known. (Ps 139:14)

The full mechanism of stringing together amino acids into a meaningful sequence is called the transcription – translation process. Transcription describes writing the code of DNA onto a messenger who will carry the code, known sensibly as messenger RNA (m-RNA). M-RNA carries the code from DNA to link up elsewhere with transfer-RNA’s (t-RNA), who are carrying amino acid payloads with them. Each t-RNA links up with m-RNA in a sequence on the m-RNA, which is delivering the code it wrote from the sequence stored in the DNA. For those who want more details, here is a brief summary:

1. A protein machine unwinds the DNA helix to get access to the stored code.

2. Messenger-ribonucleic acid (m-RNA) comes alongside the unwound code strand of DNA and copies the information from the stored code on DNA.

3. The m-RNA goes to another site in the cell where it meets transfer-RNA’s (t-RNA) carrying their amino acid payloads.

4. The three base unit m-RNA codons code with (base-pair with) the three base unit anti-codons on the t-RNA strands, thus carrying amino acids into a growing protein chain, being built one amino acid at a time in the proper sequence determined from the original code along the DNA code strand.

6. Finally, the t-RNA’s “fall away” as the new protein is then ushered away by another molecular machine built through the same process to be specifically folded and then ushered by yet another machine to a site in the cell where it carries out its function. 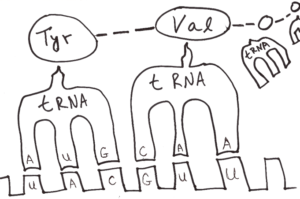 The Programming Paradox Problem of Proteins and DNA

Now the problem gets even worse for the naturalistic atheist (and for eastern pantheism or New Age philosophy of some nebulous impersonal force). We witness in this process numerous examples of circular causality – when two things are both dependent upon each other for their ability to function. Logically summarized, A causes B, and yet B causes A. Let’s focus on just one example of circular causality from our transcription-translation process.

The average protein is about 300 amino acids in length, meaning 900 bases in proper sequence are required to “spell” that protein properly. And consider all the other bio-molecules and processes that are coded in the more than 3 billion bases of the human genome. Also, it is not just the number of bases that makes for a complex organism. We are the most complex organisms, yet our 3 billion plus code bases fall way short of the 100 billion plus base units in certain flowers. This gives a whole new meaning to Jesus’ statement, “Consider the lilies, how they grow: they neither toil nor spin; but I tell you, not even Solomon in all his glory clothed himself like one of these.” (Luke 12:27) Over 100 billion bits of information. Such a display of God’s glory in the beauty of a flower and its genome! Yes, absolutely consider the lilies.

God reveals Himself in His Word, which includes the revelation of the Word made flesh, and in His natural order of His creation, with the circular causality and irreducible complexity of living systems, all the way down to the sub-cellular level. How grateful we are that He has invited us into an understanding of these processes. The infinite God who created billions of galaxies is also seen and glorified in the nano-world of irreducible complexity and circular causality of cellular machines, DNA-coding, and the DNA:protein paradox.

“For by Him all things were created, both in the heavens and on earth, visible and invisible, whether thrones or dominions or rulers or authorities—all things have been created through Him and for Him. He is before all things, and in Him all things hold together” (Col. 1:16)

[i] Alonzo Post and Emil Church are often added to make a triad of computer science founders.

[iii] This idea is rooted in Charles Lyell’s Principles of Geology (1830), though the claim from this concept that slow uniformitarianism must exclude dramatic changes, such as Noah’s flood, is unfounded. The point here is that this idea can and should be applied to requirements for an Intelligence when we start talking about programming, whether in a man-made computer or the God-made DNA code. 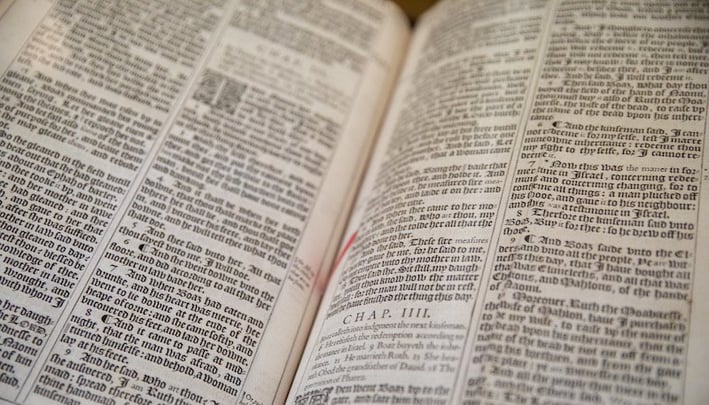