Many Christians recognize the name of Augustine of Hippo. He defended the biblical doctrine of divine sovereignty against the man-centered heresy of the British monk Pelagius. The Reformers made exceedingly frequent references to Augustine’s work as they fought against the man-centeredness of the Roman Catholic Church. But what many don’t know about Augustine was that he constantly emphasized the centrality of the affections—and particularly joy—in the believer’s life. He even defined love for God in terms of enjoying Him:

It was this pursuit of his own pleasure—indeed, his own pleasure in God Himself—that strengthened Augustine to engage in the many debates and altercations of the Pelagian controversy. When a friend asked him why he even bothered with the polemical disputes, he answered:

Everyone Desires to Be Happy

At the heart of Augustine’s emphasis on joy lay a fundamental assumption about human nature:

Every man, whatsoever his condition, desires to be happy. There is no man who does not desire this, and each one desires it with such earnestness that he prefers it to all other things; whoever, in fact desires other things, desires them for this end alone.3 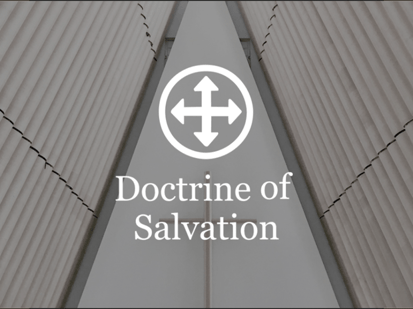 Study the Doctrine of Salvation with Mike Riccardi

This course examines the very heart of the Christian faith—the gospel—with the entire redemptive plan of God in view. Study this essential doctrine in a flexible, 100% online format.

He would express this maxim in multiple ways:

What is a life of happiness? Surely [it is] what everyone wants, absolutely everyone without exception.… It is known to everyone, and if they could all be asked in some common tongue whether they wish to be happy, they would undoubtedly all reply that they do.… Thus all agree that they want to be happy, just as they would, if questioned, all agree that they want to enjoy life, and they think that a life of happiness consists of this enjoyment. One person pursues it in this way, another in that, but all are striving for the same goal, enjoyment.4

[The human soul] tends towards what it loves, so that attaining it, it may find rest.… Just as the body gravitates according to its weight, so also the soul, in whatever direction its movement tends, is carried along by love.5

Augustine understood that, invariably and without exception, life is about the affections. We are by nature designed to seek after joy, satisfaction, delight, and happiness.

Whatever we do, we do it because
we believe it will satisfy the very cravings of our soul

Happiness is Found Only in God

But as Augustine would learn all too painfully, true joy, satisfaction, delight, and happiness are found in God alone. Every human being seeks to satisfy the longings of his soul, but only he who comes to know and worship the true God through Jesus Christ is the one who will find such satisfaction.

In that famous opening paragraph of the Confessions, Augustine declares, “You have made us, O Lord, for Yourself, and our heart is restless until it rests in You.”

We, like Solomon, will pursue satisfaction in everything under the sun, but unless we recognize that true happiness is only found in God, we too will be striving after the wind.

A happy life is to be sought from the Lord our God. Many different people have given many different answers when discussing wherein true happiness resides. But why should we go to many teachers or consider many answers to this question? It has been briefly and truly stated in Holy Scripture: Happy the people whose God is the Lord (Psalm 144:15).6

You Yourself are their joy. This is the happy life, and this alone: to rejoice in You, about You and because of You. This is the life of happiness, and it is not to be found anywhere else.7

And so it is not uncommon for Augustine to refer to God as the treasure chest of his holy joy. In the Confessions, he called God “my holy sweetness,”8 “O God most beautiful,”9 and “O my joy.”10

He would go on to explain that the counterfeit beauty of sin pales in comparison to the true, authentic beauty that exists in God.

Sin never delivers the satisfaction we seek from it

That satisfaction is found only in God Himself:

For in vice there lurks a counterfeit beauty: pride, for instance—even pride apes sublimity, where as You are the only God, most high above all things. As for ambition, what does it crave but honors and glory, while You are worthy of honor beyond all others, and eternally glorious? The ferocity of powerful men aims to inspire fear; but who is to be feared except the one God? Can anything be snatched from His power or withdrawn from it—when or where or whither or by whom?

Flirtatiousness aims to arouse love by its charming wiles, but nothing can hold more charm than your charity, nor could anything be loved to greater profit than your truth, which outshines all else in its luminous beauty. Curiosity poses as pursuit of knowledge, whereas you know everything to a supreme degree. Even ignorance or stupidity masquerades as simplicity and innocence, but nothing that exists is simpler than Yourself; and what could be more innocent than You, who leave the wicked to be hounded by their own sins?

Sloth pretends to aspire to rest, but what sure rest is there save the Lord? Lush living likes to be taken for contented abundance, but You are the full and inexhaustible store of a sweetness that never grows stale. Extravagance is a bogus generosity, but You are the infinitely wealthy giver of all good things. Avarice strives to amass possessions, but You own everything. Envy is a contentious over rank accorded to another, but what ranks higher than You? Anger seeks revenge, but whoever exacts revenge with greater justice than Yourself? Timidity dreads any unforeseen or sudden threat to the things it loves, and takes precautions for their safety; but is anything sudden or unforeseen to You? Who can separate what You love from You? Where is their ultimate security to be found, except with You?11

Let us follow in the footsteps of Augustine—who followed Paul, who followed the Lord Jesus—and seek all our satisfaction in God Himself, for He is where it is to be found. He has made us for Himself. And our hearts are indeed restless till we rest in Him.

[Editor's Note: This post was originally published in April 2016 and has been updated.]