What I Wish I Had Known Before Starting Seminary

I loved my experience at The Master's Seminary. As a recent graduate, I have been reflecting on some of the decisions I made during my time in seminary. My hope is that some new or prospective seminarian might learn from what I wish I had known before starting seminary.

I Wish I Had Taken My Time

When I began my Master of Divinity degree at TMS, I was a man on a mission. "Three years, then we're outta here" was my slogan. I took beyond a full load of classes year-round while continually working at least part-time. But while there were several factors that rightly influenced my dedication to speedy scholarship, I wish I had opted to take my time.

Going slower would have given me the opportunity to focus more attention on some assignments which, for time’s sake, I hastily finished just to get done. I know I would have benefitted more from the workload if I wasn’t cobbling a finished product together at the last minute. It would also have meant not rushing through some of the assigned books, but wrestling with each author's ideas, and better developing my own thinking.

I Wish I Had Invested More in Relationships

There is something unique about the friendships you make during your theological training. Seminary has given me some of the deepest and most precious friendships of my life. Even so, I wish I would have made those friendships more of a priority. Sure, time is always limited, and seminary is just for a season (though it is a busy one!), but I think there was a problem with my mindset. Consciously planning to be in seminary for the shortest possible time led to holding people at an arm's length. I didn't want to invest too much emotional energy into relationships if they were only for a season. Friend, that was foolish thinking.

The men I got to know during seminary have become my comrades, confidants, and counselors. Even though they live all over the world, we share not only a common Savior, but a common experience and a common theology. I know that no matter the issue I'm facing, I can pick up the phone and get wise counsel from any one of those men. I only wish I had worked even harder to cultivate those relationships when we were together.

Study expository preaching under a united faculty
of pastor-theologians on the campus of a local church.

I Wish I Had Gotten to Know My Professors Better

When I was trying to decide which seminary to attend, I came to a realization: the professors are the seminary. For me, it was not about an institution's academic prestige, rich history, or mahogany libraries. Those things did not matter to me (though mahogany is a fine timber). The crystal-clear question in my mind was, "Who do I want to train under?" This school has many things to offer, but I deliberately chose The Master's Seminary for one reason: I wanted to be trained by TMS faculty.

My expectations about the faculty—in terms of their knowledge, godliness, and character—were far exceeded. And I have had the opportunity to get to know many of my professors (that's one of the key benefits of a smaller school, by the way). But I regret not asking more of them to coffee or picking their brains about ministerial and theological questions. These are the men I came to learn from, after all.

I Wish I Had Been More Strategic With My Electives

In this program, students are given a wide range of options for electives. While the electives I chose were helpful, I could have been more strategic with how I "spent" those limited choices. Rather than planning what might be most helpful to my future ministry, I often opted for the path of expediency. During particularly busy semesters, I would avoid an elective rumored to be difficult, replacing it with one that was less work, yet also less essential for me.

Specifically, I wish I had spent more of my electives on the biblical languages. TMS offers a strong foundation in Greek and Hebrew as part of the core curriculum, but I wish I had availed myself of the opportunities to build on that foundation. How helpful it would have been to spend more time exegeting books of the Old and New Testament, in the original languages, under the teaching of my godly and precise professors. 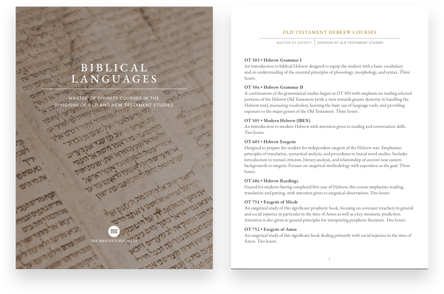 Free Resource on Studying the Biblical Languages at TMS

I Wish I Had Started Sooner

I trust that in the Lord's providence, He had good and wise reasons for not putting me in seminary until my early thirties. I am not questioning that. But I do regret my own immaturity during the years I spent in ministry before realizing I needed serious training. Words would fail if I tried to recount the former days that I now look back on with embarrassment. I think of the things I taught in Bible studies and sermons and the faces of those who came to me for council—but for whom I was unequipped to help. I was ministering to the best of my ability, but I was drawing from a shallow well.

If God has called you to ministry, don’t drag your feet. While it was those very events that led me to recognize how ill-prepared I was and to seek further training, I wish that I hadn't made those mistakes. I wish I had not delayed.

Don’t Wait to get Equipped for Ministry

Despite these regrets, in reflecting on what seminary has done for me, I do feel equipped for pastoral ministry. The well is now much deeper. There is so much more I must learn, but God has equipped me spiritually. And I am confident that He has used seminary as the means to give me the tools, resources, and relationships to meet whatever challenges pastoral ministry throws my way.

If God has called you to ministry, don’t drag your feet. Explore whether seminary is a viable option for you. Talk to your pastor and reach out to an admissions counselor. And if you do pursue seminary training, make the most of it, for His glory and for the benefit of those to whom you will minister.

[Editor's Note: This article was originally published in October 2017 and has been updated.]