Identity Hermeneutics: The Obsession with Personal Identity and the Distortion of the Truth

Identity politics dominate today’s political landscape. Few would disagree that the single issue of 2020 that will have the greatest impact in the coming years is not Covid-19, but the great social reset political leaders are promising along the lines of ethnic, economic, gender, and sexual identities.

Although it is difficult to define the concept precisely, identity politics generally refers to the categorization of people according to the class of the marginalized and the class of the privileged. Politicians who espouse this ideology pit these classes against one another, pander to the class that claims victimhood, and then profit from the ensuing conflict. Their self-identification with the class of the ethnic, economic, or sexually oppressed ostensibly provides them the right to gain power over the oppressors. Ironically, one does not even need to be a member of the disadvantaged class in order to reap the reward of identity politics. So long as one espouses the ideology, he can tap into the benefits—a fact illustrated by the wealthy politicians, media moguls, tenured university professors, and Hollywood elites who have become even more wealthy, powerful, and protected by becoming its loudest proponents. They claim they want to equalize the playing field. In reality they just want to profit from it.

If the evangelical church saw itself as distinct from the world and its politics (John 17:14–16; Phil 3:20), and if the delegated watchmen—the church’s elders and teachers—took seriously their role to protect the church against both blatant and subtle forms of ideological infiltration (Titus 1:7–9), the culture’s obsession with identity, classifications, and power would pose no existential threat. But the threat has become existential; the culture’s ideology has already penetrated the church’s defenses. This ideological infiltration takes place most sublty in what can be called identity hermeneutics.

Used in relation to the Bible, the term “hermeneutics” refers to the principles employed to interpret a biblical text. God desires to impart specific knowledge to His image-bearers. This knowledge is mediated not through ecstatic experience or extrasensory perception, but through human language (Ps 19:7–11; John 17:17; 1 Cor 2:12–13; 2 Tim 3:16–17). This language must be interpreted correctly if it is to yield the knowledge God intended. The hermeneutical principles the reader employs will either lead him toward or away from this meaning.

Consequently, “identity hermeneutics” refers to the use of personal identity as a primary principle for the interpretation of God’s word. To be clear, evangelical proponents of identity hermeneutics still contend that the Bible is the highest authority and acknowledge that pure subjectivism in interpretation is a dead end. They may even publicly affirm the inerrancy of Scripture. But like identity politicians, identity hermeneuticians insist on identifying readers according to the classifications of the advantaged and the oppressed. Interpretation, they say, is always “socially situated.” They believe that even though an objective reality (divine revelation) exists, and even though there are surprising patterns of agreement about what that reality communicates, the interpretation of that reality necessarily differs from person to person, most notably along the lines of privilege and marginalization. On the one hand, the privileged Christian will always interpret the biblical text in a way that protects and advances his own interests; he has too much to lose if he does not. On the other hand, the ethnically, economically, or sexually marginalized Christian will be able to read the text without as much bias; he has little to lose when reading the text at face value.

Underpinning this worldview is a theory known as standpoint epistemology. This theory teaches that every person interprets the world from a particular standpoint loosely shared by others like him according to ethnicity, economic status, gender, and the like. This interpretation becomes distorted in proportion to the advantages the person enjoys. Apart from an intentional effort to acknowledge and renounce such power, one always views the world through this power’s distorted lens. Conversely, marginalized groups—because they do not possess such advantages—are situated to view the world through a less opaque lens. Thus, any successful study of reality must begin from the standpoint of the marginalized.

Integrating this epistemology into the study of Scripture, proponents of identity hermeneutics require that those they deem privileged must give deference to the standpoints of those deemed disadvantaged. Because the interpretations of the disadvantaged are the least biased, most truthful, and closest to reality, the privileged interpreter will never arrive at the truth unless he openly disavows his advantage and submits to the views of the disadvantaged. But how do identity hermeneutics actually work in practice?

There are two cardinal rules, particularly with respect to privileged readers (after all, they are the ones who need the guidance of interpretive rules most of all).

First, before even approaching the biblical text, the privileged reader must conduct a thorough exegesis of his own identity; he must acknowledge that he can never rise above his uninterpreted self in his current state. As he comes face to face with his status as an oppressor, he must identify and problematize every advantage he discovers—even those he may not personally enjoy but which are nonetheless characteristic of his community.

Second, the privileged reader must revere the perspective of the marginalized simply for the virtue of their identity. Their lack of advantage has made them epistemologically less biased to truth. He must place himself at their feet and commit to view reality—and Scripture in particular—through their experiences. Consequently, if the reader is male, he must ensure that female scholars have a dominant voice in his biblical interpretation. If the reader is Caucasian, he must determine that commentaries authored by people who have a color of skin historically associated with suffering will have a special influence over his exegetical process. As a heterosexual, the reader must commit to giving due consideration to the perspectives of the LGBTQ community. If the reader lives above the poverty line, he must promise to wrestle through the works of liberation theologians. Until the reader views the biblical text from these marginalized standpoints, he cannot possibly arrive at the truth.

These two rules form the essence of identity hermeneutics. While you may be unaccustomed to its terminology, you are well-aware of its message. Identity-driven hermeneutics are commonplace in evangelical circles today, promoted in everything from children’s Sunday School material to the seminars at popular pastors’ conferences to the curriculum used in training the next generation of theologians and missionaries. You may well have already been shamed by one of its champions for not interpreting the truth “according to a particular perspective,” and accused that your refusal to do so is evidence of your social or ethnic “fragility.” But contrary to its alleged mission, identity hermeneutics are not bringing the church to a purer understanding of the text. Instead, they are canonizing the role of personal identity and obfuscating divine truth. 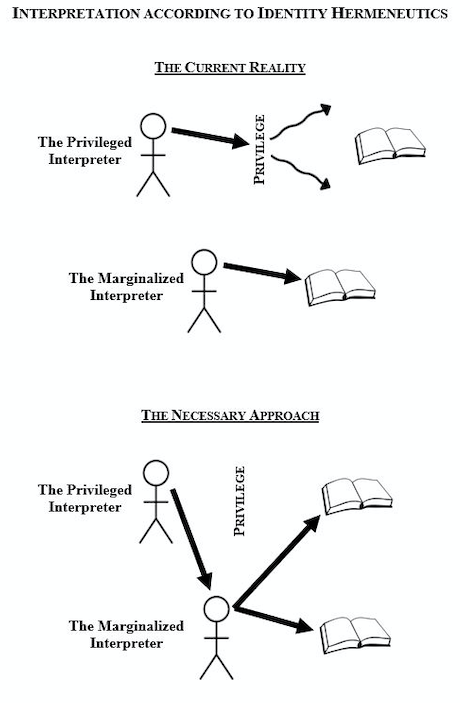 Indeed, as fallible students of God’s word, we must all acknowledge the presence of personal bias. We dare not naively think we have identified and corrected all our interpretive blind spots. The battle against preunderstandings must rage on relentlessly until our glorification. Consequently, we have no right to assert private judgments. Our interpretations must always be accountable to the people of God, and this means we must be open to the contributions and corrections made by all members of the priesthood of believers—throughout history and today—in our quest for interpretive faithfulness. We must be like the Bereans, who examined the Scriptures together as they discerned the meaning of Paul’s preaching and its consistency with what God had already revealed (Acts 17:11).

But do not be deceived. This is not the emphasis of identity hermeneutics. Its primary goal is not to point out the ubiquitous danger of bias, nor to muzzle subjective preunderstandings, nor to seek the standpoint of the biblical writer alone. What matters most in identity hermeneutics is the identity of contemporary readers—more specifically, the identity of these readers pitted against each other according to ethnicity, economics, sexuality, and the like, with the caveat that the disadvantaged in these categories have the advantage in explaining truth. Identity hermeneutics makes the particular social standpoints of today the gateways to the ancient text. If you want to know what the ancient text means, you must pass through these gateways. If you do not, you will never come to an accurate understanding of the truth.

Listening to the Right Person

We must reject identity hermeneutics, its veneration of personal identity, and its naive certainty in the objectivity of the marginalized. Like the identity politicians of our day, identity hermeneuticians are pitting classes within the church against each other, pandering to the most vocal communities, and profiting in manifold ways as a result. Instead, we must reaffirm that the only one who has the advantage is the biblical writer. As the author, he is the sole authority—the sole gateway—to the knowledge God has revealed (e.g., Eph 3:3–7; 2 Tim 2:7). As readers of his text, we all must sit in the dust of humility at his feet.