Why Translate the Bible?

After completing his junior year at Occidental College, a student from Los Angeles, CA traveled to Guatemala to engage in gospel ministry. He worked hard at improving his Spanish while serving alongside local churches to distribute tracts and preach the gospel.

As months passed, he realized that most of the Guatemalans had their own language, Kaqchikel. So, he began studying it. He eventually learned their language and worked with a team of translators over the next 10 years to complete the Kaqchikel New Testament.

I’d like to give you four reasons for giving your life to the ministry of Bible translation, and I’d like to start with the reason that has moved many over the centuries.

The student from Occidental College who translated the Scriptures saw, firsthand, the spiritual need of his Kaqchikel friends and their churches.  The young student turned translator was named William Cameron Townsend. After completing the Kaqchikel New Testament in 1929, he went on to establish Wycliffe Bible Translators.

More than any other missionary before him, Townsend wanted to quantify the number of languages without Scripture. In 1933, Townsend reported, “I found that there were at least a thousand tribes in the world, all speaking different languages, who have never received a single portion of God’s Word.”

Today, thanks to decades of research and mission work, we know that there are 7,361 languages. Of these languages, only 683 languages have a complete Bible. That means that only 9% of the world’s languages have the full counsel of God. An additional 1,534 languages have a New Testament. However, 2,163 language communities are still waiting for a translation.

When I was a young student visiting Chad in 1989, I was also moved by the need that I saw in that corner of the world. I remember spending several days with Pastor Victor, a Chadian pastor whose heart was for his people, the Ngede, to have the Scriptures in their own language. He encouraged me to use my training to help meet this need.

As we spoke that evening, I admired the Africa night sky, with stars brighter than I had ever seen. The heavens declared the glory of God, yet how would the Ngede and other language groups across Chad see the greater glory of Christ without the Word in their language?

There's an overwhelming need for Bible translation. No matter how great this need is, though, I would say that of all the reasons to translate the Bible, this is the least important. There's something more significant than just a need.

The vast need for Scriptures in the languages of the world has motivated translators over the generations. However, the need itself would not be compelling if it were not for what the Bible is itself. In other words, the nature of the Bible is an even stronger motivation to translate it.

What is the Bible? It is divine revelation from God. In 2 Timothy 3:16, Paul wrote to Timothy that, “All Scripture is inspired by God…”  Peter expanded on this thought in 2 Peter 1:20-21, writing, "But know this first of all, that no prophecy of Scripture is a matter of one’s own interpretation, for no prophecy was ever made by an act of human will, but men moved by the Holy Spirit spoke from God."

What greater joy than to know the glory of Christ and make it known?

Furthermore, God’s Word is for our salvation. Paul wrote in 2 Timothy 3:15, “…from childhood you have known the sacred writings which are able to give you the wisdom that leads to salvation through faith which is in Christ Jesus."

Moreover, Paul wrote about the Word as God’s means of sanctification. When he met with the elders from Ephesus to bid them farewell, he commended them, “to God and to the word of His grace, which is able to build you up and to give you the inheritance among all those who are sanctified” (Acts 20:32).

When William Tyndale published his translation of the New Testament in English in 1526, he noted that he undertook the endeavor for their spiritual edification. In the preface, he wrote, “I have here translated, brethren and sisters most dear and tenderly beloved in Christ, the New Testament, for your spiritual edifying, consolation, and solace.”

Considering that the Bible is God’s Word and His means to bring salvation and build up believers in the faith, who wouldn’t want to make it available to every language of the world?

Why translate the Bible? There is a third reason that is even more important than these first two—because of what the church is! The church has a unique, eternal place in God’s plan. Moreover, there is no church without the Scriptures, and the Scriptures without the church do not achieve their purpose.

What is the church? It is the true believers of Christ, purchased by the blood of Christ for the worship of the triune God. The local church is a gathering of believers who meet to worship God and encourage one another.

When the first church met in Jerusalem in Acts, they were devoted to the teaching of the Word. Luke records in Acts 2:42, “They were continually devoting themselves to the apostles’ teaching and to fellowship, to the breaking of bread and to prayer.” When the early church faced complaints over the distribution of food, the apostles summoned the believers and instructed them to select seven men to oversee the distribution. The apostles recognized that their ministry of preaching and teaching was so important that they could not take time for other tasks. In Acts 6:4, the apostles told the church, “But we will devote ourselves to prayer and
to the ministry of the word.”

Paul also instructed Timothy to keep the Word central in the worship of the church. In 1 Timothy 4:13, he wrote, "Until I come, give attention to the public reading of Scripture, to exhortation and teaching." Thus, Timothy and his congregation were to regularly engage in reading, preaching, and teaching the Word.

Furthermore, for reading, preaching, and teaching to truly edify the church, the believers had to have the Scriptures in a language they understood. Paul understood that using a language that no one understood was pointless. In fact, in 1 Corinthians 14:1-26, Paul corrects the Christians in Corinth for their practice of speaking in tongues without an interpretation.  He states it is better to say only five understandable words than to speak in a tongue that no one knows, saying in 14:19, “… in the church I desire to speak five words with my mind so that I may instruct others also, rather than ten thousand words in a tongue.”  He underscores the motivation in 14:26: “Let all things be done for edification.”

And so the church exists to worship God through the Word, and the believers must have the Scriptures in a language they understand to truly edify one another.

An incredible need for the Bible exists around the world, in thousands of languages. Yet, as we have seen, that is not the most convincing reason for Bible translation. It is because the Scriptures are the Word of God that we translate them, but even that is not the strongest argument for translation.

The translation of the Word is one part of the greater work of establishing His kingdom.

Yet, there is one more reason which is even more important than these first three, because without this final reason, the others would crumble.

We see this final reason on vivid display in the Apostle John’s vision of the throne room of God in Revelations 4-5.

In Revelation 4, John was taken in a vision to heaven. He sees worship around the throne, with angels, elders, and mysterious creatures continually praising God the Father. And no sooner does John take in what he is seeing than an angel proclaims with a voice that halts all worship, “Who is worthy to open the book and to break its seals?”

John watches and begins to weep bitterly, because there is no one who can take the scroll. Did he think God’s purposes would be thwarted? Did he think there would be no more praise around the throne? But then one of the elders told John to stop crying and, instead, look, because the Lion of Judah, the Root of David, had overcome and could take the book!

Then John looks at the throne, but he doesn’t see a lion, but rather a lamb—a lamb that looked like it had been slaughtered for sacrifice! The Lamb took the book from God the Father, and immediately heaven burst into praise!

Worthy are You to take the book and to break its seals; for You were slain, and purchased for God with Your blood men from every tribe and tongue and people and nation. You have made them to be a kingdom and priests to our God; and they will reign upon
the earth."

Then a second song springs up from the thousands upon thousands of angels, "Worthy is the Lamb that was slain."

Why is the Lamb worthy to open the book and receive such praise? Because He was slain. And by His sacrificial death on the cross, He purchased a people for God and has made them a kingdom and priests to God.

In the praises around the throne we hear of the fulfillment of Christ’s commission to his disciples in Matthew 28:18-20. Jesus instructed his disciples to go and make every nation his disciples, baptizing them and teaching them to observe all that He taught. Furthermore, He promised to be with His disciples until the end of the age. Now, in Revelation 5:9, at the culmination of that age, the Lamb is praised because He purchased for God people from “every tribe and tongue and people and nation” and made them a kingdom and priests. In other words, He is praised because, through the church, His bride, He accomplished His mission by the power of the Spirit for the glory of the Father.

For the church and for each believer, this is the culmination. This is where all is leading – the redeemed nations worshipping around the throne. And here we find the ultimate reason, the most compelling reason: we translate the Word because the Lamb is worthy! Worthy of our praise, worthy of our lives, worthy of our faulting efforts to make His infinite greatness known in the languages of His redeemed!

Considering the great needs and the many blessings we have received, should we not, from a thankful heart, ask what we are called to do with what we have received? We should join the Apostle John of old and set our eyes on the worship around the throne. What greater joy than to know the glory of Christ and make it known? And the translation of the Word is one part of the greater work of establishing His kingdom and bringing Him eternal praise!

If you have a heart for reaching the unreached, consider the Tyndale Center for Bible Translation. The Tyndale Center offers a translation emphasis for aspiring pastor-translators within the Master of Divinity program. 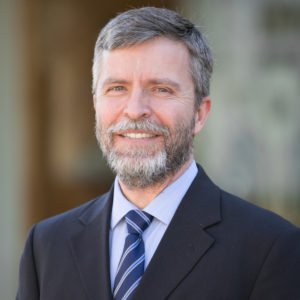 Dr. Aaron Shryock serves as the Director of the Tyndale Center for Bible Translation at the Master's Seminary. Prior to joining TMS faculty, Dr. Shryock spent several years in Africa involved in linguistic research, lexicography, and translation.