Confirmation bias. The Oxford Dictionary of Psychology defines it as “the tendency to test one’s beliefs or conjectures by seeking evidence that might confirm or verify them and to ignore evidence that might disconfirm or refute them.”[1] It manifests itself in all fields of human knowledge, from scientific experimentation to criminal investigation to medical diagnosis. It is that internal “yes man” that stands ready to manipulate information to make it confirm what one already assumes is true. It is that subjective “lens” which is donned to interpret the facts.

At its root, confirmation bias is the consequence of the Fall. All of Adam’s offspring are marked by the resolve to “suppress truth in unrighteousness” (Rom 1:19). In their sinful state, human beings are subjectivists, incapable of interpreting anything except through the lens of self. Thus, when the natural man hears the word of God, he rejects it because his internal “yes man” confirms it to be what he always believed it was: “foolishness” (1 Cor 2:14).

But while confirmation bias defines the unbeliever at his core, it continues to afflict even those who have been made alive in Christ. It still exerts an influence from that decaying “outer man” (2 Cor 4:16). Consequently, every Christian must be vigilant with respect to the role bias plays in interpreting God’s Word. The “yes man” is always lurking in the study, ready to impede full obedience to the Word by reinforcing errant belief, even if slight. The faithful interpreter must be aware of his presence and take appropriate steps to neutralize his influence. This vigilance is exercised, in part, by recognizing the nature and distinction of two indispensable steps of Bible study: exegesis and application.

The term “exegesis” comes from a compound Greek word which literally means to lead or guide out of. Therefore, “exegesis” came to refer to the act of interpretation because it carried the notion of “leading out of a text its meaning.”

But when bias is permitted to influence the interpretive process, a preconceived understanding is read into the text. This is called “eisegesis.” The exact opposite of exegesis, “eisegesis” means to lead or guide into. Eisegesis occurs when the interpreter takes steps to contribute meaning to the biblical text. He looks for evidence that confirms his preunderstanding, ignores details in the text that refute it, manipulates the data, and concludes that the text “means” what he already believed it to mean. As a result, the authority of the biblical text is muted even while it is being claimed. In some way the reader’s understanding has still not submitted to the full intent of the writer. His bias governs interpretation.

What James says regarding the misuse of the tongue we can also apply to our handling of Scripture: “we all stumble in many ways” (James 3:2). One is either naïve or dishonest to claim that he never dons the lens of bias. But rather than working harder to neutralize this subjectivity and believing this to be a worthy pursuit, interpreters are increasingly waving the white flag and embracing bias as good and necessary.[2] In fact, it is not unusual today to hear claims from today’s prominent evangelicals that the Bible cannot be understood unless it is read through the “lenses” of particular social, economic, ethnic, or sexual identities.

The result is a fracturing of the church into a myriad of groups sparring over which bias is of greater value for reading Scripture. The purpose of interpretation then is not to labor to lead out of the text that one objective meaning—that meaning which is the same for all social, economic, ethnic, and sexual identities. Worse than that, this glorying in bias decreases Christians’ confidence in the Bible, leading many to echo the question of the Serpent himself, “Indeed, has God said?” (Gen 3:1).

Indeed, God has said. And because he has, the reader is obligated to remove bias, lenses, preunderstandings, prejudice, or whatever they may be called. He must make it his ambition to engage in exegesis in the real sense—not by name only, but in reality. He must aspire to be the kind of exegete Luther had in mind when he stated, “The best teacher is the one who does not bring his meaning into the Scripture but gets his meaning from the Scripture.”[3]

The second indispensable step in Bible study is “application.” “Application” can be defined as the act of relating the objective meaning of the ancient text to the life of the contemporary reader.

Application is aimed at the entire person

Whereas exegesis requires the pursuit of objectivity, application by nature includes subjectivity. No two Christians share the same experiences or circumstances. Precisely how the text of Scripture asserts its authority over each interpreter—how it will address the individual reader’s mind, will, and affections—will understandably differ. For example, while Paul’s command to “obey your parents” (Eph 6:1) has just one meaning that is the same for all social, ethnic, and economic categories, how it applies to the 8-year-old in the steppes of Kazakhstan and the 40-year-old in suburban California will differ.

But even here the subjective nature of application must be kept under careful control. It must be exercised between two important guardrails.

a. First, it must be understood that exegesis is prior to and separate from application.

This implies that application—properly defined—is not part of the exegetical process. The starting point in exegesis is not one’s personal circumstance, experience, or perceived need. By making these things a part of the interpretive process, the interpreter immediately renders his exegesis subjective. He exchanges the context of the biblical writer for his own. This is eisegesis or reader-centrism, and it leads to all kinds of error.

Instead, faithful application comes after the hard work of exegesis has been completed. Once the meaning of the text has been clearly recognized, then one is in the right position to ask, “Now how must I live?”

b. Second, it must be understood that application is subsequent to but inseparable from exegesis.

While application is not properly part of the interpretive process, while it comes after exegesis is complete, it remains controlled by it. The meaning of the text—discovered through objective interpretation—must determine the nature of its application.

Indeed, the biblical writer did not have the contemporary reader’s personal experience in mind when he recorded God’s word. Nonetheless, his meaning sets the parameters and trajectory for ongoing application. When these controls are abandoned and application is detached from exegesis, legalism results. Biblical texts are used to justify all kinds of “thou shalts” and “thou shalt nots” never intended by the biblical writer.

Ultimately, the role bias plays in interpretation and application determines whether one has a theology “from above” or a theology “from below.” Theology from above is a theology that develops according to the verbal revelation of God in the context in which it was originally given. From that objective, transcendent position it “comes down” to influence the personal experience of the contemporary reader. Conversely, a theology from below begins with the personal context of the contemporary reader. It develops according to the subjective experience of the reader and from there “goes up” to influence what the text must communicate. There is a world of difference in the result.

In summary, the words of Robert Thomas serve as an important reminder:

A rejection of this plea to let unbiased exegetical data have its way will mean a transformation of interpretation from being an explanation of meaning—its proper function—to being an obfuscation of that meaning—exactly what the body of Christ does not need. Hermeneutics needs to accentuate the positive value of objectivity and eliminate negative concessions to subjectivity.[4]

[2] For a helpful resource that traces contemporary perspectives on bias in interpretation, see Robert L. Thomas, “The Origin of Preunderstanding,” in Evangelical Hermeneutics: The New Versus the Old (Grand Rapids: Kregel Academic, 2002), 41–62.

What is the Holy Spirit's Role in Bible Study? 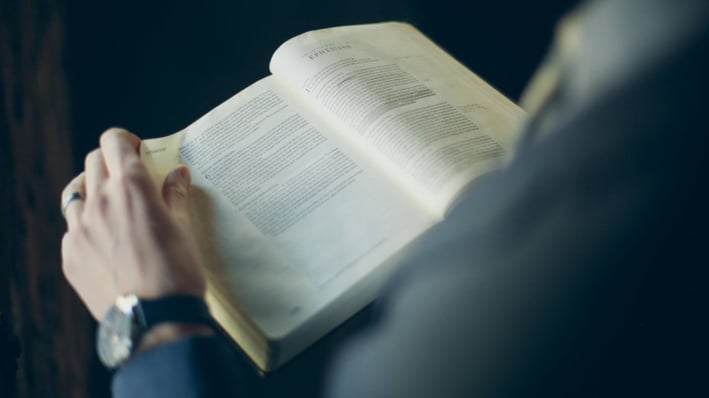 Does Your Hermeneutic Hold to Sola Scriptura?