Presenting God as He Defines Himself

The postmodern world is known for its rejection of exclusive truth claims. Postmodernism views all truth as relative, and exclusive truth claims as arrogant, offensive, and impossible. As we live and minister in this post-modern context, how should we present God’s character to those to whom we minister and know?

On the one hand, we must navigate the fine line between beliefs and practices that are negotiable and those that are not. In light of biblical teaching on “liberty” and the issues of a weaker and stronger conscience, there are times when we must not be adamant for everyone to accept or arrange their lives according to our personal understanding or conviction. The following are some such examples: the music we listen to, the movies we watch, whether or not to drink, etc. There is room for disagreement on these issues. There are, of course, biblical principles that offer guidance on these matters, but broadly speaking, if the Bible does not explicitly or clearly address an issue, we need to allow for differing opinions rather than holding to our preference as an exclusive truth claim.

On the other hand, generally, the above reality is not what threatens the church. Even though this arrogance of a “just my way” attitude can be destructive, it is not as dangerous as the other extreme: reticence. Reticence is a “whatever works for you” attitude about all beliefs—especially those that are explicitly, clearly, and repeatedly taught in Scripture.

We do not want to crash on either rock of extremity, but instead we should desire to allow the Bible to determine those exclusive truth claims that guide our lives and determine our understanding of the Bible. What our world needs most is a biblically-based presentation of God in all His glory, majesty, and power.

There are numerous truth claims presented by the Word of God that should serve as core values for every believer that longs to honor our great God. In this article, my intention is to focus on one passage’s definition of God from the book of Jonah. Although this is not necessarily a debated passage with postmodernists, it makes a central point. God Himself defines who He is, and that biblical definition should impact our understanding of God in far-reaching ways.

Most are familiar with the account of Jonah—the prophet who was opposed to carrying God’s message to the Ninevites. Chapter 1, however, gives no indication of the basis for Jonah’s opposition to God’s directive. Later, after Jonah’s deliverance from the great fish, his preaching on the imminent judgment on the Ninevites, and the widespread repentance that caused God to withdraw His promised punishment (to Jonah’s horror), we read what originally drove Jonah to flee in the opposite direction, away from Nineveh. What Jonah knew to be true of God drove him to rebel against His command. He declared:

. . . I knew that you are a gracious God and merciful, slow to anger and abounding in steadfast love, and relenting from disaster. (Jonah 4:2b)

Jonah was afraid that Yahweh would embody those character traits toward the evil Ninevites.

“Gracious” refers to God’s generous giving of undeserved blessings. The giver is the superior, and under no obligation to be gracious. The recipient has no merit to justify any such treatment.

God extends compassion not only to those who do not deserve it, but also to those who desperately need it. This is what it means for Him to be “merciful.” This word is closely related to the word for a woman’s womb. The word association provides an illustration—it stresses the feelings of compassion a mother would have for her child, the product of her womb. The tender, loving care a mother gives to her child is illustrative of the compassion God feels for His spiritual children. You can be sure that however strong a mother feels for her child, God’s compassion for His children exceeds that infinitely.

As the God who is “slow to anger,” God withholds His judgment on sin or patiently endures as He gives sinners the opportunity to repent (2 Peter 3:9). He is ever so slow to reach the point where He must express His divine wrath. He is long-suffering to those who are falling short of His desires, yearning that before judgment must fall, they will repent of their godless practices.

Jonah also knew that Yahweh abounded in “steadfast love”. This loyal/steadfast/covenant love was closely connected with the covenant God made with Israel. It highlights the determination of God to be faithful to His covenant and thereby to His people. It refers to God’s persistent, sure covenant love for His people throughout the ages.

Finally, Jonah’s God was characterized by “relenting from disaster” (or relenting from bringing disaster). The point here is that if people genuinely repent, God is willing to withdraw His promised punishment.

Besides this, we face another danger in our postmodern world. With all the emphasis on tolerance and pluralism, we are pressed to dilute (or even reject) the clear and distinctive presentation of God found in the Scriptures. You have probably heard people say, “My God would not do that!” The world presses us to define God in a way that destroys His incomparability and avoids offending anyone who might have a different idea.

What our world needs to hear is a biblically-based presentation of God in all His glory, majesty, and power. He is the one and only God to whom all mankind will have to give an answer. Postmodern thinking (the belief that any way is fine) leads to postmodern living (a life that says any conduct is fine). May that never characterize our life or preaching. An absolutely distinctive God of great power deserves nothing less than followers who live clearly distinctive lives that point all around them to this awesome God.

In a postmodern world that rejects exclusive truth claims, let’s commit ourselves to be believers and teachers and preachers who place the spotlight of our preaching and teaching and living on the great God of the universe, as the Bible defines Him.

[Editor's Note: This article was originally published in March 2019 and has been updated.] 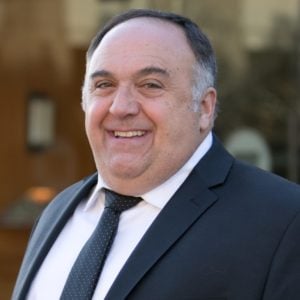 Michael Grisanti is Professor of Old Testament and the Director of the Israel Study Trip at TMS.